The theme this week refers to the number of the current week of the year…32 out of 52.  Difficult to believe more than one-half of the year has passed us by and I feel I still have many stories to share.  This theme was vague and left me to ponder many ideas.

I considered looking up important events that happened during different ancestors’ 32 year of life.  Fortunately Ancestry.com makes this an option with their timeline feature.  Most of the female ancestors I looked up had given birth in their 32nd year.  Quite surprising when you consider 32 years old seems older than we usually think about for childbirth these days.

My other thought was to find important events ancestors had lived through in the “32 years” – 1632, 1732, 1832, 1932 and so forth.  Unfortunately, this was much more difficult than I imagined and I’m ready to send Ancestry a suggestion for another feature they can add!

I settled on 32 questions I would like to ask an ancestor.  Specifically, I chose 32 different ancestors and have one question for them to answer.  If somehow from the great beyond they are able to send me the answers, please do so-preferably in a typeset page and signed by you or a letter written in your best penmanship, sealed with your personal seal in red wax.  Asking too much?

Without further ado, here is my list of “32 Questions I Wish To Know The Answers To”

I’ll let you know if I get any letters posted to me with red wax seals on them.

Different, unique, outside the norm – we all have ancestors who can be classified as such.  Daniel and Mary V.(Peroni) Medi fill this category for me.  I don’t know much about them.  They are my only ancestors from France in my heavily English and German family. Little snippets of information dangle teasing me to spend more time finding them.  Little snippets – they were born in France in early 1820s.  Clues – Napoleon had just died; Young and Champollion had just broken the code of the Rosetta Stone. France was still in turmoil over who its true ruler should be.This is the world into which Daniel Medi and Mary Peroni were born.  Why did they immigrate to the United States?  What caused them to leave?  Where were they married?  Did they have siblings?  What was their backstory? 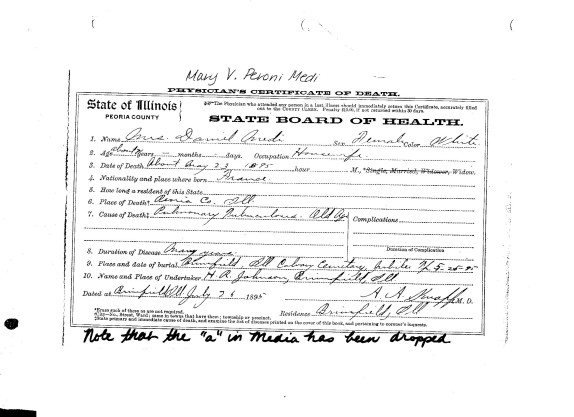 Somewhere along the line they were married and immigrated to the United States. Their first child – Mary Victoria Medi – was born in 1850 in France. Daughter #2 – Mary Margaret Medi followed in 1853 born in New Jersey.  Mary Augusta Medi followed the next year being born in New Jersey. Mary Rosa Medi and Mary Katherine Medi were both born prior to moving to Illinois.  Mary Louisa Medi was the first child born in Illinois. Mary Josephine was born in Jubilee Township, Peoria County, Illinois in 1866 as was the last daughter, Mary Caroline Medi.   Eight daughters – all named Mary XX.  Now that’s different and nearly a genealogist’s nightmare! 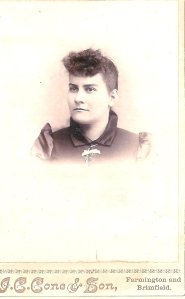 These 2nd great grandparents are different in that I can find little about them save a tombstone in Peoria County, Illinois.  They appear in the 1860 and 1880 Census for the State of Illinois, but other than showing their nativity as France, no other clues exist.  Peoria County, Illinois is a heavy German immigrant area.  Did the Medi’s live near the border with Germanic areas?  Medi and Peroni don’t seem to be traditional French names.  They lack the sound of a French ancestry.

All together, they are just different – the odd branch sticking out on the family tree.   One would assume they were Roman Catholic with eight daughters named Mary.  Could there be parish papers for baptism to fill in blank spaces?

I’ll have to leave that mystery for a ….different day.